Other than lucking out with an occasional group of foreigners holding a free class on the Han River in the summer, all of the yoga classes here are either held in Korean or are also far, far away. So when we moved to Korea I started practicing almost entirely at home. I have been using an online streaming program (Gaiam TV) along with making up my own flows as a I go. 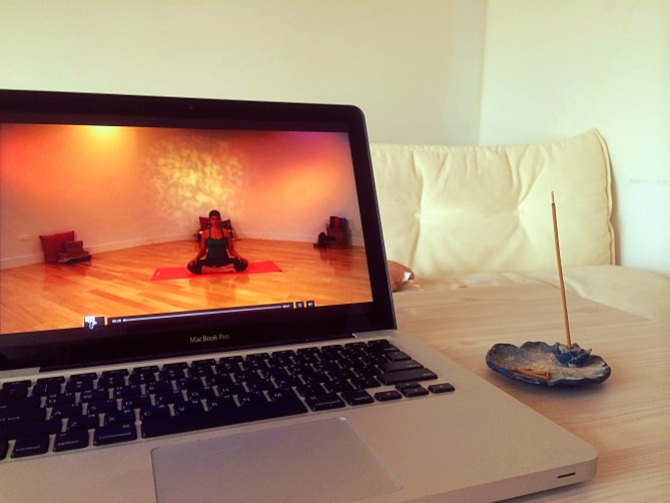 Sometimes yoga at home involves playing with the dog, which can be a plus or a minus depending on how likely it is I will become highly distracted and give belly rubs rather than do boat pose.

I have enjoyed the freedom to do whatever I want to do during class when I’m practicing in my living room. When something doesn’t seem to suit my body, I’m much less shy about modifying or even sitting it out in the privacy of my own living room. This is something that shouldn’t be a problem in a real class either, but I have noticed that it is just easier to not do something when no one else is going to see you not do it.

Unfortunately, that’s also true for things like sit-ups. Or plank. It’s just easier to not do something when no one else is going to see you not do it… This is something I try to be very introspective about, listening to when my body truly needs a break and when I’m just being lazy.

It has been difficult in our tiny apartments to really set aside a physical space for yoga practice. Last year our living room served as our dining area, social area, and yoga space. This year in our studio apartment I am simply situated in the empty space between the kitchen, living room, and bedroom. This means that I grade papers, cook, clean, train the dog, chill on the couch, read, AND do yoga in the same space. You know how they recommend you don’t work or watch TV in bed? I’m pretty sure the same rule applies to yoga. But it can’t be helped, so it takes a lot more turning inward. When you go to a studio, you are literally arriving at your mat, arriving at your space. For a home practice, because I can’t physically arrive, it is doubly hard to mentally arrive. I open my eyes and see the book I’m reading and get distracted, or I am in a twist and look over at the kitchen and start to plan dinner. Because of this, I’ve noticed I’ve been practicing more and more with my eyes closed. 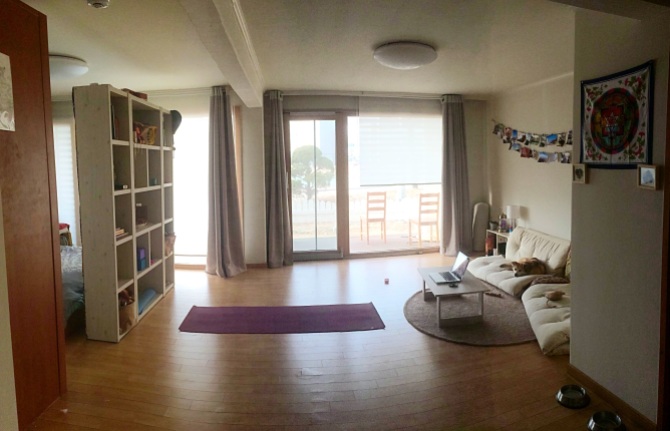 The dog is another lovely and hilarious distraction. For some reason the only time she has developed a humping habit is when I am in downward dog. She also enjoys stretching while I’m stretching. At other times, she will literally bring toys over to drop in our open, upward-facing palms. This is when she gets a kong and some kennel time.

On the plus side, my home practice has given me such room to play. I feel fine about going into and falling out of inversions, and it’s helpful to be able to hit pause on a video and practice something for ten minutes that would have been passed over in a class to reach the time limit. At the same time, I miss having someone tell me to move my gaze forward, or inch my foot just a little to the right – the little things someone else can see that I can’t.

Practicing at home was something I could never get myself to do seriously when there was a studio down the street; now I can hardly get to the studio when I only practice at home. Over break while I was in the US, I managed to go to about 5 classes and realized how much I miss being with a teacher in-person. I wish I could find a convenient studio, but it’s still nice to know that I’ve built the foundation for a continued home practice whenever I make it back to a studio regularly. Until then, I’ll be doing yoga at home.